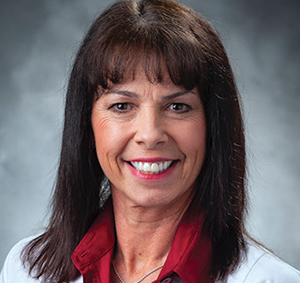 Carpenter graduated from Pleasant Valley in 1987 where she was one of the top ten members of her class and named most outstanding senior. She was a five-year letterman and a five-year starter in each of three sports – volleyball, basketball and softball – for the Raiders.

As the setter in volleyball, she helped the Raiders to a state championship in 1984 and a second- place finish at the state tournament in 1985. Pleasant Valley was an area champion in each of her final three years of high school. The Raiders won the Calhoun County tournament championship in 1986, her senior season, after finishing as county tournament runner-up in her sophomore and junior seasons. Carpenter was all-county as a junior and again as a senior. She was chosen for the all-area team in each of her final three years and was area most valuable player as a senior.

In basketball, Carpenter was a deadly long-range shooter before the three-point shot was instituted in high school. She led Pleasant Valley in scoring, rebounds, assists and free throw percentage as a senior as the Raiders reached the Class 3A semifinals and finished 19-6. She was named by the coaches as a member of the Calhoun County tournament’s all-tournament in each her last four basketball seasons.

She received a volleyball scholarship from Jacksonville State and was a four-year letter winner and four-year starter as the Gamecocks’ setter. Carpenter was all-conference three times and team captain for two seasons. Her 4,216 career assists were a school record that lasted into the 2006 season.