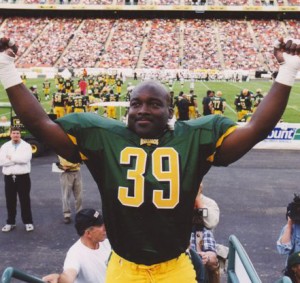 Pless played fullback on offense for Johnny Ingram at Anniston High School but it was as a linebacker that he truly excelled. Ingram once described a Pless tackle as a train wreck. As a junior he was an All-County honorable mention. In 1981, his senior season, Pless averaged 15 solo tackles and seven assists per game. He was first team All-County at linebacker. Pless was an honorable mention on the Birmingham News all-state team then in the 1982 AHSSA North-South All-Star game he was selected Most Valuable Player.

Considered too small to play in the Southeastern Conference prior to his All-Star game performance, Pless had committed to play at the University of Kansas. After the All-Star showing schools closer to home made inquiries but Pless stayed with Kansas.

During his freshman year at Kansas, Pless played in every game. As a sophomore, junior and senior he led the Jayhawks in tackles every year and was first team All-Big Eight three consecutive years.

As a junior Pless had 25 tackles, including two quarterback sacks, and caused a fumble in a 28-11 win over rival Oklahoma. By the end of his junior season Pless already held the record for career tackles at Kansas and was voted second team All-American by the Associated Press.

At the end of his senior season Pless was chosen an honorable mention All-American by both AP and UPI and had recorded double figure tackles in 25 consecutive games. He was also selected All- Big Eight Academic first team and named NCAA Region VII Academic All-American.

In his four years at Kansas, Pless recorded 633 tackles, a school and Big Eight Conference record. More than 20 years later, KU’s second all-time career mark is 403 tackles. The top three single season records all belong to Pless with 206 in 1984, 191 in 1985 and 188 in 1983. After graduating from Kansas, Pless was again considered too small – this time by the National Football League. He headed north and played 14 seasons in the Canadian Football League. In 11 of those years he was a CFL All-Star.

When Pless retired prior to the start of the 2000 season, he had a CFL record 1,241 tackles. Five times he was named the league’s outstanding defensive player.

In 1993 Pless helped the Edmonton Eskimos to their upset victory in the Grey Cup game. He was inducted into the Canadian Football Hall of Fame in 2005.