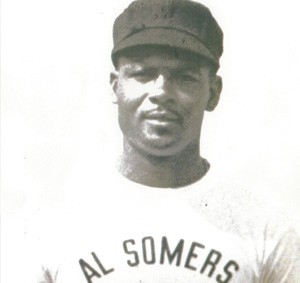 Born in Autaugaville in 1923, Motley and his family soon moved to Anniston where the future umpire attended elementary, junior high and high school. In the fall of 1939, at 16, Motley left Anniston for Dayton, Ohio, to live with family members there. The following year he saw his first Negro Leagues baseball game at Duck Park in Dayton. The experience cemented a lifetime love of baseball even though Motley’s talents as a player were limited.

Motley volunteered for the Marines early in World War II. At Okinawa he was wounded by a sniper’s bullet. While recovering, he began umpiring baseball games that fellow Marines had organized to pass time. More combat duty followed but he didn’t lose his enthusiasm for umpiring.

Honorably discharged in 1946, Motley returned to Anniston briefly then moved to Kansas City. He returned to high school and graduated at age 24. He worked at a local General Motors plant and began umpiring amateur baseball games.

Motley umpired in the Negro baseball leagues from 1948 through 1958. For eight of those seasons he was chief umpire. Motley officiated the East-West Classic, the Negro Leagues’ annual all-star event at Chicago’s Comiskey Park, four times. His umpiring was animated, entertaining fans, but Motley considered himself a rulebook umpire and enforced its contents.

After a ten-year effort, Motley gained admission to the renowned Al Somers Umpire School in Daytona Beach, Florida, in 1957. He graduated at the top of his class but received no job offers from organized baseball. He returned to the Somers Umpire School for a more intensive course the next year and again finished at the top of the class. In August of 1958, Motley received a call from the Pacific Coast League and became the second black umpire in organized baseball. He umpired in the Pacific Coast League again in 1959 and 1960 then gave up his goal of becoming a major league umpire. Returning to Kansas City, Motley continued to officiate locally. In 1970, he served as chief umpire at the college world series in Omaha, Nebraska.

Motley is a founding member of the board of directors of the Negro Leagues Baseball Museum in Kansas City.