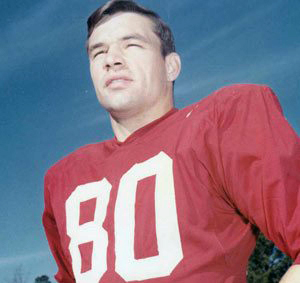 As a senior in 1962, Vinson quarterbacked Oxford to a 13-7 victory over Anniston, the Yellow Jackets’ first win over the Bulldogs in football since 1920. Oxford ended the season 7-1-2, losing only to Wellborn in the Calhoun County championship game. During the regular season, Vinson passed for two touchdowns and rushed for one in three different games – wins over Piedmont, Wellborn and Saks. In Oxford’s 26-20 victory over Talladega, he passed for one touchdown and returned a kickoff 80 yards for another score. For the year, Vinson scored 15 times – passing for seven touchdowns, rushing for six touchdowns, returning one kickoff for a touchdown and one interception for a touchdown. He was a unanimous choice for the All-County football team.

Following the 1966 season, Vinson was named by the Associated Press as a first-team Little All-American. Over the course of his four-year career at Jacksonville State, Vinson returned 62 kickoffs for 833 yards and 66 punts for 502 yards. The Gamecocks won outright or shared four Alabama Collegiate Conference championships during his tenure. Vinson is a member of the Jacksonville State University Athletic Hall of Fame.