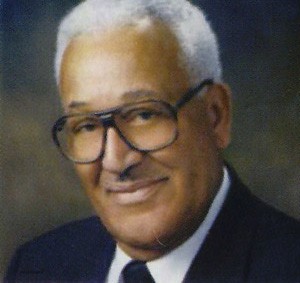 Dunn graduated from Alabama State Teachers College, now Alabama State University, where he was an outstanding student and excelled in both basketball and football. In the fall of 1939, Calhoun County Training School principal C. E. Hanna hired Dunn to teach science and coach all sports. Except for military service during World War II, Dunn remained at the Hobson City school as a teacher, coach and administrator until his retirement at the close of the 1985-86 school year.

Dunn coached girls and boys basketball and enjoyed success with both. Before the Alabama Interscholastic Athletic Association began its state tournament for girls in 1949, Dunn’s Calhoun County Training girls teams won more than thirty consecutive games. Dunn coached the Calhoun County Training girls to District tournament championships in 1952 and 1954 and a second place District finish in 1955. The 1954 team was runner-up in the AIAA North Section tournament — the Association’s statewide round of eight.

Dunn’s 1959-60 boys basketball team won the Northeast District tournament . His Tigers finished second in the District tournament in 1950, 1956 and 1958. In 1949 and 1950 Dunn coached his boys teams to first place finishes in the Camp Hill Invitational. In 1952 and 1954 Calhoun County Training won the Cobb Avenue Invitational. The Tigers won the 1960 Maroon and Gold Classic hosted by Carver of Gadsden after finishing second in that tournament in 1957.

In 1968 Dunn became principal at Calhoun County Training, a position he held until he retired.