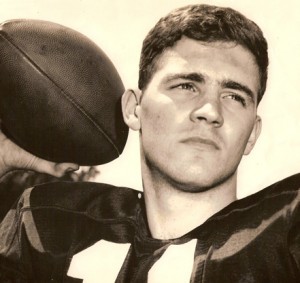 O’Steen was a four-sport athlete at Anniston High School prior to his graduation in 1956. In football, he led Billy Bancroft’s Bulldogs in scoring his final two seasons. As a junior, O’Steen rushed for seven touchdowns, passed for four scores and caught one touchdown pass. He was a first-team member of the Class AAA (large schools) all-state team and honorable mention on the Orlando Sentinel’s 35th All-Southern team. Anniston ended 7-2-1.

His senior season, O’Steen rushed for 1,077 yards on 120 carries and scored 12 touchdowns. He led the Bulldogs in rushing yardage as well as points scored. O’Steen also completed 13 of 23 passes for 266 yards and three touchdowns. On defense he had eight interceptions as the Bulldogs finished 8-1-1.

In 1955, O’Steen was again a first-team member of the Class AAA all-state team. He was one of five Alabama players selected to the All-Southern first team.

From Anniston, O’Steen continued his athletic career at the University of Alabama on a football scholarship. His three interceptions in 1957 helped him earn his first letter at Alabama under J.B. Whitworth.

O’Steen remained at Alabama during Paul Bryant’s fabled 1958 “turnaround” season, moving from backup quarterback to starting halfback two games into the season. That year he averaged 22.7 yards per catch on seven receptions and returned a team-high 16 punts for 162 yards. One of those was a 44-yard return for a touchdown in a 29-6 victory over Furman, the first of Bryant’s 232 wins at Alabama. O’Steen also caught a 61-yard touchdown pass in the third quarter to close the scoring against Furman.

Two weeks later, O’Steen’s 18-yard run set up Alabama’s only touchdown in a 9-7 victory over Mississippi State. Quick-kicking deceptively, he averaged 45.5 yards on nine punts then intercepted a pass to end a late threat by State. It was Bryant’s first win at Alabama over a Southeastern Conference foe.

The following week, in Alabama’s 12-0 homecoming win over Georgia, O’Steen’s 14-yard first quarter touchdown run gave his team all the points it would need to win consecutive games for the first time since 1954.

As a senior, O’Steen moved to fullback and was the Crimson Tide’s second-leading rusher. He again led in kickoff returns.