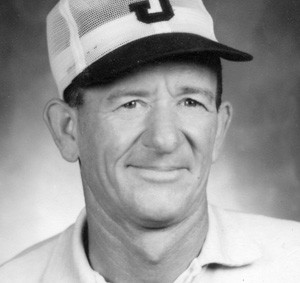 A native of Dutton, Deerman graduated from Scottsboro High School and Jacksonville State University – then Jacksonville State Teachers College – before beginning his career as an educator. Deerman coached junior high and high school basketball for 33 years. He began coaching at Locust Fork and returned to Calhoun County in 1953 as coach at Roy Webb Junior High. After four years at Roy Webb, Deerman coached junior high basketball at Walter Wellborn for two seasons. Then, for 25 years, Deerman was varsity basketball coach at Jacksonville High School before retiring after the 1983-84 season.

The Golden Eagles were Alabama High School Athletic Association Class 3A Area tournament champions in 1976, 1978, 1979, 1980 and 1983. The 1978 team was Deerman’s most successful. That team lost its second game then won 28 consecutive games, including a Region championship that earned Jacksonville one of eight berths in the 3A state tournament. The Eagles lost to Eufaula 51-47 in their opening tournament game and ended the season 29-2.

Deerman was Calhoun County coach of the year in 1975, 1976, 1978, 1979 and 1983. His 33-year career win-loss record was 545-283. Twenty times his teams won at least 20 games. In addition to his basketball responsibilities, Deerman also coached other sports including football and track. He received a masters degree from Peabody College. In 1995 he was inducted into the Alabama High School Sports Hall of Fame. Deerman died August 12, 2000.