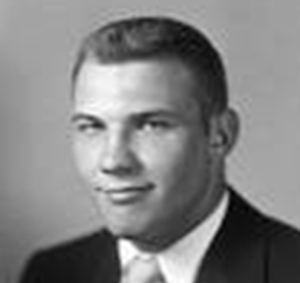 Rose lettered in football, basketball and baseball at Anniston but football was his passion. On the football field, Rose was a three-year starter at end on offense and defense. In Billy Bancroft’s run-oriented offense, Rose was primarily used as a blocker on offense. He was the Bulldogs’ hardest hitter on either side of the ball and was elected a football co-captain prior to the start of his senior year. Rose was first team All-County end as a sophomore in 1951, second team as a junior in 1952 and first team again as a senior in 1953. Following the 1953 season, he was named first team All-State at end by the Birmingham News. Rose received football scholarship offers from schools as far away as Southern California. He narrowed his choices to Georgia Tech and Auburn then cast his lot with Bobby Dodd’s Yellow Jackets.

Rose played in the Alabama High School Athletic Association’s North-South All-Star football game in August 1954 before entering Georgia Tech. He was chosen by his teammates as a co-captain for the North team.

At Georgia Tech, Rose started at end for the freshman team in 1954. As a varsity player, he continued in the role of starter at end in 1955, his sophomore season, and was the only sophomore in Tech’s starting lineup that year. In the final game of Rose’s sophomore season, Georgia Tech defeated Pittsburgh in the Sugar Bowl. His 25 tackles, one blocked punt and three pass receptions earned Rose a berth on the Southeastern Conference’s All-Sophomore team. He started again in 1956 and recorded 24 tackles. Tech again closed the season with a bowl victory over Pittsburgh, this time in the Gator Bowl. Rose was held out the 1957 season. He returned as a starter in 1958 and made 22 tackles. Following graduation from Georgia Tech, Rose moved to Macon, Ga., and began officiating high school games. He continued to officiate when he moved to Tampa and later to Atlanta.

In 1975, Rose became a college official and continued to officiate until he retired in 2005. In 2001, he received the Bill Wade Unsung Hero Award from the All-American Football Association in recognition of his accomplishments as an official.