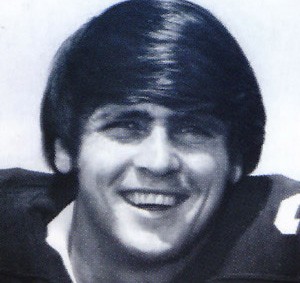 Henley was outstanding in both football and track at Oxford High School. In football he was All- County and All-Conference for three seasons (1966, 1967, 1968). Henley led Oxford in scoring in both his junior and senior seasons. He scored seven touchdowns in 1967. As a senior Henley scored twenty-one touchdowns, establishing a school record, and led the Yellow Jackets to an 8-2-0 finish. In 1968, Henley was at his best against Oxford’s biggest rivals. He scored all three Yellow Jacket touchdowns in a win over Anniston (19-0) and a loss to Saks (27-18) and also scored three times in a win over Walter Wellborn (37-19).

The Anniston Quarterback Club named Henley the outstanding back in Calhoun County as a senior. He was also a high school All-American selection his senior year.

In track, Henley was All-County in 1967, 1968 and 1969 and All-State as a junior and a senior. At the 1969 Calhoun County track Henley won both the triple jump and the 120-yard high hurdles. His performances established meet records in both events.

From Oxford, Henley took his football talents to Auburn University. A tailback, he lettered as a sophomore (1970), junior (1971) and senior (1972). In 1972, Auburn finished 10-1 overall and 6-1 in the Southeastern Conference, losing only to LSU at Baton Rouge. As a senior, Henley was an All-SEC selection as he led the Southeastern Conference in rushing with 843 yards in nine games. His eleven touchdowns led Auburn in scoring that year. Even though he did not return punts, Henley also led the Tigers with 934 all-purposes yards. Henley ended his three-year career at Auburn with 1,534 rushing yards on 343 carries.

Henley was inducted into the Alabama Sports Hall of Fame in 2000.