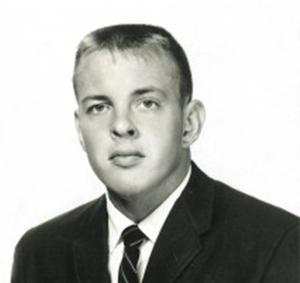 At Wellborn High School, Bell was one of the finest all-around athletes Calhoun County has ever produced. He received a football scholarship to the University of Alabama, played in the Wigwam Wisemen national East-West high school All-America basketball games in Kansas, hit over .400 his senior year as a first baseman in baseball and ran the grueling 440-yard dash in track.

A two-way starter at end in football, Bell was voted by the county’s coaches as Calhoun County’s lineman of the year following his senior season in 1957. He was one of two players unanimously chosen as first-team all-county as a senior. That same year, the Birmingham Post-Herald awarded him second-team all-state honors at end. As a junior, he had been second-team all-county and was an honorable mention selection as a sophomore.

In basketball, Bell was named to the Calhoun County tournament’s all-tournament team as a junior and a senior. As a senior, he led the tournament in scoring with 64 points in three games and was unanimously picked for the coaches’ all-county team. After his senior season, Bell earned first-team all-state recognition from the Birmingham Post-Herald and was the leading vote-getter on the All-Sixth District team chosen by the coaches.

As a sophomore, Bell earned a varsity letter after scoring two crucial touchdowns. Against Tennessee, he caught a 21-yard touchdown pass from Pat Trammell as underdog Alabama forced a 7-7 tie. Two weeks later, his 36-yard touchdown reception from Bobby Skelton was the only touchdown of the game in a 10-0 homecoming win over Mississippi State.

Early in his junior season, illness caused Bell to lose 40 pounds and he gave up football.