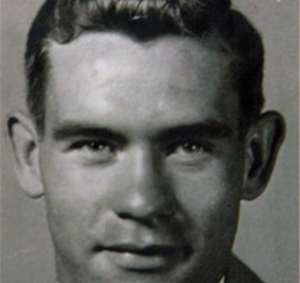 A Calhoun County native, Prickett was a backfield star at both quarterback and halfback and a devastating linebacker on coach Lou Scales’ Alexandria teams of 1949 and 1950 that returned the Valley Cubs to football prominence.

As a junior, Prickett was at his best when his team needed him most. Alexandria was 1-2-1 after its first four games and trailed Munford 6-0 before Prickett scored on a 40-yard run in the third quarter and the game ended in a 6-6 deadlock. The following week, Prickett started Alexandria on a five-game winning streak when he scored three touchdowns and one extra point, accounting for all of the Valley Cubs’ points, in a 19-7 win at Childersburg.

A 19-6 win at Jacksonville pushed Alexandria to 3-2-2 on the season. Prickett rushed for 74 yards in the first half, including a 16-yard touchdown run, and added 27 yards on the ground in the second half. A series of long runs by Prickett sparked the Cubs to a 33-0 win over Piedmont and 5-2-2 worksheet. A fractured ankle suffered in the first quarter kept Prickett sidelined in most of Alexandria’s season-ending, 14-0 win over Glencoe.

For his play on both offense and defense, Prickett was voted to the coaches’ All-Calhoun County team as a first-team selection. He was also named third team All-State by the Birmingham News/Birmingham Age-Herald. The team included all schools regardless of size and just 11 players made each of the three teams.

Alexandria played its “home” games at Anniston’s Memorial Stadium in 1950. The Cubs opened the season with a 61-0 win over Ranburne. Reserves saw most of the action. Despite playing sparingly, Prickett scored when he took a cross buck 40 yards. After the Valley Cubs upped their record to 2-0-0 with a 30-13 win at Ohatchee, Pricket scored on runs for 95 yards and 40 yards as Alexandria downed Munford for a 47-19 road win. Alexandria improved to 4-0-0 with at 34-18 win over Childersburg as Prickett scored on runs of 35, 46 and 23 yards.

In a 26-19 win over Cleburne County, Prickett’s 100-yard kick return gave Alexandria a 13-12 lead and his 21-yard touchdown pass completion provided needed insurance. The Cubs followed with a 45-0 win over Jacksonville in which Prickett ran 44 yards for one touchdown and completed a 50-yard touchdown pass.

In his final high school game, Alexandria upset Anniston 20-12 and Prickett rushed for all three touchdowns. It was the first time a Calhoun County team had defeated Anniston since the 1920 season. The Valley Cubs finished 8-0-0, Alexandria’s first undefeated and untied team.

Prickett was first team All-County in 1950 and the only unanimous pick. He was named first team All-State after his senior season. In 1950, Prickett was named to the National High School All-America football team selected by the Wigwam Wisemen of America, that era’s equivalent of today’s Parade All-America status. He was also a member of the North squad for the annual AHSAA North-South all-star game in Tuscaloosa’s Denny Stadium in August.

He accepted a football scholarship to Georgia Tech but stayed just two quarters before returning to Alexandria and joining the military.