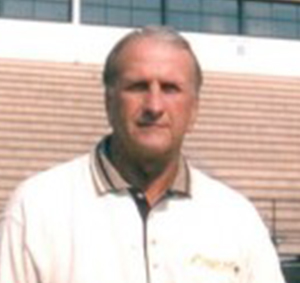 In high school at Louisville, Mississippi, Herring was a four-sport letterman. He played football, basketball and baseball as a freshman at Mississippi College. After a year of junior college, he earned his undergraduate degree at Mississippi State. His first head-coaching position was at Jones Valley in 1969. After four years with the Brownies, Herring spent the 1973 season as an assistant at North Alabama.

In 1974, Herring returned to his hometown and coached Winston Academy to private school state football titles in 1975 and 1983. In 1984, Herring came back to Alabama and led Oneonta to a 9-2 record and a playoff appearance.

With a resume that included two state championships in Mississippi and successful teams at Jones Valley and Oneonta, much was expected of Herring when he was hired as head football coach at Oxford prior to the 1985 season. Herring did not disappoint.

Each of Herring’s 14 teams at Oxford reached the Alabama High School Athletic Association football playoffs. In eight of those seasons the Yellow Jackets were area champions. Three times, 1988, 1989 and 1993, Oxford finished as AHSAA Class 5A state champion. The 1988 and 1993 teams were each a perfect 14-0.

During his career at Oxford, Herring’s teams were 118-42. That worksheet included a 21-11 record in playoff games. He was selected Coach of the Year in Calhoun County by his coaching peers in 1986, 1988, 1991, 1993 and 1998. In 1993, the Alabama Sports Writers Association named Herring its state Coach of the Year for Class 5A. The 1993 Yellow Jackets finished the year in the USA Today Super 25 national rankings.

Following the 1995 season, Herring was one of six athletic directors nationally to receive the prestigious citation of excellence from the National Federation of State High School Associations.

From Oxford, Herring moved to Newnan, Georgia. Seven of his 10 Newnan teams reached the playoffs. The Cougars were playoff participants in each of Herring’s final six seasons and region champions in each of his last three years. In 2003 and again in 2008, Newnan reached the Class AAAAA semifinals. In 2008, Newman’s defense allowed only 4.4 points per game, best among AAAAA schools.