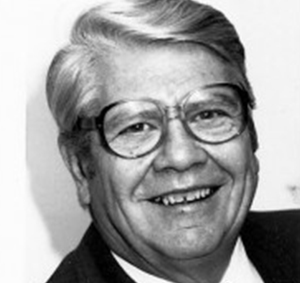 Even in high school at Marshall County High, the school we now know as Guntersville, where he worked on the school newspaper, Cox knew he wanted to be a sports writer. After graduating in 1948, he became the sports editor and one-man sports staff at the Anniston Star.

In his 10 years as sports editor in Anniston, Cox was recognized by the Associated Press for the best sports story of the year in Alabama four times. His story on the 1954 Cotton Bowl, in which Alabama’s Tommy Lewis came off the sideline to tackle Dickie Moegel of Rice with Moegel headed for a sure touchdown, was Cox’s first award winner.

In 1956, Cox covered the World Series between the Brooklyn Dodgers and New York Yankees. His story on Game 5 of the Series and the perfect game hurled by the Yankees’ Don Larsen earned a second Associated Press award.

He topped himself in 1957 when he was the first to break the story that Paul “Bear” Bryant was leaving Texas A&M and returning to the University of Alabama to become head football coach at Bryant’s alma mater. His final AP recognition came for coverage of the 1958 Indianapolis 500 and the death of popular driver Pat O’Conner in a fiery crash.

Cox treated local stories, particularly local high school sports, as if they were national events. His regular column, “After the Whistle”, was a must-read part of The Star on an almost daily basis. He was also instrumental in the creation of the annual Calhoun County basketball tournament and in bringing organized youth baseball to Anniston. He was a co-founder of the Alabama Sports Writers Association.

His 53-year career in newspapers led him from Anniston to Miami, Atlanta, Columbus (Ga.) and Opelika. After leaving Anniston, Cox continued to win writing awards. At Opelika in 1975, he received the Herby Kirby Memorial Award, presented by the Alabama Sports Writers Association for the overall best sports story of the year in Alabama.

He served as president of the Southern League Baseball Writers Association. Cox was publisher of the Opelika-Auburn News when he retired in 1991. He died in 2012 at age 83.