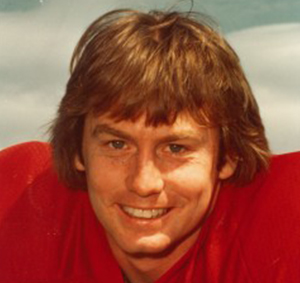 Tucker was a four-sport athlete at Alexandria from the fall of 1970 through the spring of 1973. As a senior in the 1972 football season, he moved from halfback to quarterback and helped the Valley Cubs to a 9-1-0 regular season record.

Alexandria was the seventh of eight teams to qualify for the Class 2A playoffs that year under a points system established by the AHSAA. The underdog Valley Cubs defeated Lauderdale County in the quarterfinals before losing to eventual state champion Oneonta in the semifinal round. It was Alexandria’s first playoff appearance.

Tucker was first-team All-County at quarterback for small schools as a senior. He was honorable mention on the Birmingham News’ Class 1A/2A All-State team.

In basketball, Tucker was All-Calhoun County tournament in the small-school division in 1973. He was also all-area and played in the AHSAA North-South basketball all-star game in Tuscaloosa that summer. Tucker also lettered three years in both baseball and track while at Alexandria.

After graduating from Alexandria in 1973, Tucker spent one year at Marion Military Institute where he lettered in football, basketball and track. In the fall of 1974, he transferred to the University of Alabama and red-shirted for one year.

At Alabama, Tucker lettered in 1975, 1976 and 1977 at cornerback. He led the team in interceptions in both 1976 and 1977. In 1977, his senior season, he was second-team All-Southeastern Conference and Academic All-SEC. That season, Tucker led Alabama in passes broken up and was the leading tackler among players in the secondary.

Tucker and Ozzie Newsome were the permanent captains for the 1977 team, Tucker for the defense and Newsome for the offense.