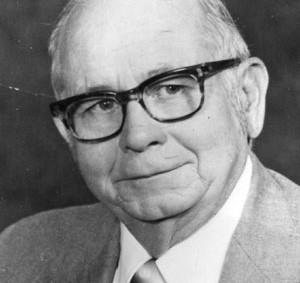 Street began his interest in sports as a guard on the Glencoe High School football teams of the early 1930’s. His playing career ended with his graduation from Glencoe as valedictorian in 1935 but his involvement in sports was just beginning.

Following his graduation from Jacksonville State in 1939, Street took a full time position with a Gadsden radio station where he remained until he moved to Anniston with WHMA in 1941 as sports director and program director. He remained with WHMA and Anniston Broadcasting Company for more than fifty years.

Street helped establish the Calhoun County basketball tournament in 1951 and promoted the event by personally broadcasting the tournament’s games for more than thirty years.

Street is a charter member and former president of the Anniston Quarterback Club. He was instrumental in the Anniston Quarterback Club’s decision to sponsor a season-ending football game between Calhoun County’s two best high school football teams with the proceeds benefiting children’s charities. The game was initially played on Thanksgiving Day and became known as the Turkey Bowl. Crowds in the thousands attended those games and many more heard Street’s broadcasts.

As president of Anniston broadcasting Company Street started the first FM radio station in East Alabama in 1947, WHMA-FM, and the area’s first television station, WHMA-TV, in 1969.