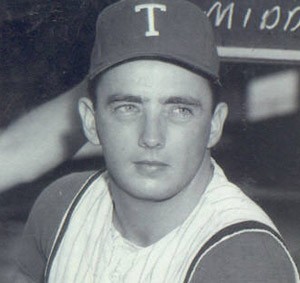 Gable was a two-year starter in football at halfback for Anniston High School in 1957 and 1958, his junior and senior seasons. As a junior, in Billy Bancroft’s final year as coach, his 65-yard run late set up Anniston’s tying touchdown against Wellborn. He scored twice as the Bulldogs defeated Shades Valley and rushed for the winning touchdown against Etowah County with less than two minutes left in the game.

As a senior, Gable played for Freeman (Bulldog) Johnson. His most dominating performance came against Emma Sansom when he rushed for 273 yards and three touchdowns. Against Etowah County, Gable completed two touchdown passes.

His prowess in football notwithstanding, Gable’s best sport was baseball. He was a pitcher and outfielder at Anniston from 1957 through 1959. In 1958, his junior season, Anniston captured its first and only Alabama High School Athletic Association state baseball championship. Anniston was 15-0 entering the two-of-three state championship series against Central of Phenix City but lost the first game. The series moved to Anniston the next day. Gable kept Anniston’s championship hopes alive with a seven-inning no-hitter in the first game of a doubleheader, won by the Bulldogs 2-0. He struck out 11 and walked one. In the second game, Gable returned to the mound for another seven innings and won 7-0 on a three-hitter, retiring the final nine batters. In six playoff games that year Gable pitched five shutouts and struck out 63 opponents in 42 innings.

After graduation from Anniston in 1959, Gable received the first full baseball scholarship offered to a freshman by Auburn University. A year later Gable signed a professional baseball contract with the Pittsburgh Pirates. He pitched in Pittsburgh’s minor league system for three years. Gable played eight more years of professional baseball with the Cincinnati Reds organization, the last five with the Tampa Tarpons.

Gable continued to attend Auburn during baseball’s off-season and received his undergraduate degree in 1964. He coached high school baseball in Florida for several years.