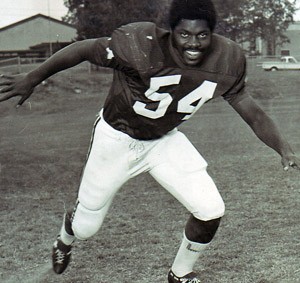 Hutcherson began his football career at Anniston High School where he played fullback on offense and linebacker on defense. In 1969, his senior season at Anniston, he scored the winning touchdown in Anniston’s homecoming comeback win over Talladega and helped the Bulldogs to their best finish in four years. That year Hutcherson was first-team All-County as a linebacker. He was chosen to play in the Alabama High School Athletic Association’s North-South All-Star game after his senior year at Anniston and served as a team captain.

From Anniston, Hutcherson went to Livingston University, now the University of West Alabama, where he made his presence felt almost immediately. In 1971, his sophomore season, Livingston won the National Association of Intercollegiate Athletics (NAIA) national football championship. Hutcherson was a starter at linebacker and led the Tigers in tackles in their semifinal win over West Liberty. While at Livingston Hutcherson was named All-Gulf South Conference and All-Alabama Small College in both 1972 and 1973 and was voted Gulf South Defensive Player of the Year in 1972. He was a first-team NAIA All-American in 1972 and an honorable mention All-American in 1973.

After completing his college career he played in the 1973 Senior Bowl. Hutcherson was a fourth round draft pick by the Dallas Cowboys in the 1974 National Football League draft. That fall he played in all 14 games for the Cowboys as a reserve linebacker. With the San Diego Chargers in 1975, injuries limited him to eight games. The Seattle Seahawks drafted Hutcherson in the 1976 expansion draft. He was projected to start at linebacker until a knee injury in the Seahawks’ final pre-season game ended his football career.

Hutcherson was named the Livingston University Player of the Decade for the 1970’s and was inducted into the University of West Alabama Hall of Fame in 1985.