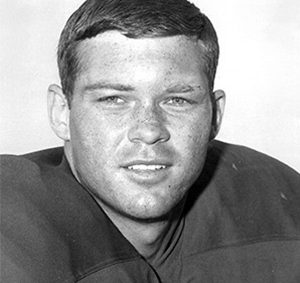 Ingram was an outstanding offensive lineman and linebacker at Wellborn, starting as a freshman and continuing to start each year thereafter. Following his junior season in 1962, he was one of eleven players chosen by Calhoun County’s football coaches as first-team all-county. Ingram was selected as a guard.

As a senior in 1963 he was one of the captains of Wellborn’s Calhoun County championship team. He repeated as first-team all-county at guard and received more votes than any other member of the first-team eleven. Statewide honors followed as Ingram was named first-team all-state at tackle for Class 3A by the Birmingham Post-Herald, one of eleven players to receive first-team recognition.

Following his senior season, Ingram was awarded a football scholarship by the University of Georgia, where he earned a letter in 1967. Before going to Georgia, Ingram was invited to play in the AHSAA North-South football game and started at guard for the North squad.

After graduating from the University of Georgia in 1969, Ingram coached two seasons in Georgia then returned to Alabama as an assistant football coach at Anniston in 1971. In 1972, he became an assistant at Wellborn.

In 1973, Ingram became head coach at Wellborn. In six seasons with Wellborn he never had a losing team, going 43-19-3 as the Panthers’ head coach. Two of his teams were area champions and advanced to the postseason. His 1976 team lost in the quarterfinal round of the playoffs. Ingram’s 1977 team won its first thirteen games before falling in the Class 3A championship game.

Ingram became head coach at Anniston in 1978. In seven seasons with the Bulldogs, his overall record was 37-31-2. Ingram coached Anniston to two region championships with one playoff win in 1981 and two playoff wins in 1982.