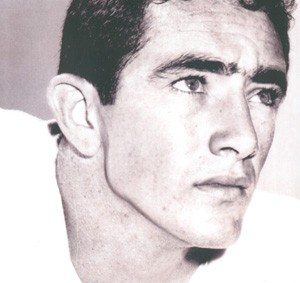 Pettus (1938-1998) starred as a running back in football at Oxford High School from 1953 through 1956. As a freshman, he was honorable mention all-county. In 1954, his sophomore season, Pettus was second-team all-county at halfback even though Oxford was 1-8-0.

As a junior, Pettus helped Oxford to a 7-1-1 regular season record. He scored twice, including an 85-yard return of the second half kickoff to break a 6-6 tie, as Oxford opened the season with a 24-6 win over Southside. With 8,000 people watching, he ran for Oxford’s only touchdown in a 7-7 tie with Anniston. When Oxford closed the regular season with a 39-6 win over Alexandria, securing a place in the Turkey Bowl, Pettus had four touchdowns and an interception. In the Turkey Bowl, Oxford avenged its only regular season loss with a 33-7 win over Jacksonville. Pettus scored one touchdown rushing and one on a pass reception. Coaches chose him as a member of the all-county first team.

In 1956, Pettus’ senior season, he served as a co-captain as Oxford went 8-1-0 in the regular season. Pettus scored the tie-breaking touchdown on a 64-yard run late in the final quarter as Oxford defeated Piedmont 14-7. He tallied all three Oxford touchdowns in a 20-6 win over Wellborn. A 21-6 win over Alexandria closed Oxford’s regular season, giving the Yellow Jackets their first Calhoun County championship. In the game, Pettus scored twice and had two interceptions. The following week, Oxford won its second consecutive Turkey Bowl by downing Alexandria 13-0 as Pettus scored on a 40-yard pass play.

At the conclusion of his senior year, Pettus was a unanimous all-county choice. The coaches also voted him back of the year and player of the year. Pettus was third team All-State in the coaches All-State voting conducted by the Birmingham Post-Herald. He was also honorable mention on the 10th annual Wigwam Wisemen prep All-America team.

Pettus earned a football scholarship to Auburn where he lettered at halfback in 1958, 1959 and 1960. As a sophomore, Pettus recovered a Florida fumble at the Auburn 2-yard line to preserve a 6-5 road win. The next week, Pettus caught five passes, three for touchdowns, as what was expected to be a close game with Mississippi State became a 33-14 rout. That same year, he scored Auburn’s first touchdown in a 14-8 win over Alabama. As a junior, he returned the opening kickoff 88 yards for a touchdown as Auburn defeated Kentucky 33-0. Pettus graduated from Auburn with a degree in aerospace engineering.