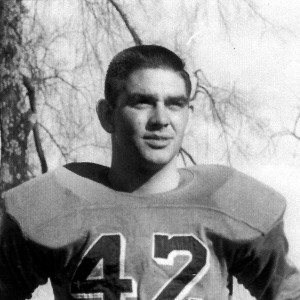 Luttrell was a four-year starter at guard for Jacksonville High School under football coach Ernest (Banty) Newman from 1951 through 1954. Luttrell was second team All-County as a sophomore. He served as a team co-captain in 1953 and 1954.

Following his junior season, Luttrell was chosen first team All-County. He received the most votes of any player making the team and was credited with making more than half the Golden Eagles’ tackles that season. He was named by the Birmingham News to its first team All-State team for schools Jacksonville’s size.

As a senior, Luttrell helped Jacksonville to the Calhoun County championship. The Eagles downed previously undefeated Piedmont 32-25 in the game that decided the title.

Luttrell was a unanimous choice for first team All-County following his senior season. For the second straight year, he was named first team All-State by the Birmingham News.

At the conclusion of the 1954 season, Luttrell was named to the high school All-America team chosen by the Wigwam Wisemen of America football committee. Jacksonville High School retired his No. 42 jersey. He was a member of the North squad for the annual Alabama High School Athletic Association North-South All-Star game in August of 1954.

At Jacksonville State, Luttrell lettered four years at guard. He was a member of the 1955 team that defeated heavily favored Rhode Island 12-10 in the Refrigerator Bowl and was a team MVP in 1956.