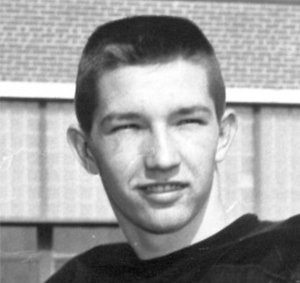 Ray starred in football at Oxford High School where he was a starter at running back on the varsity for four seasons. The Yellow Jackets’ only returning starter as a sophomore, he scored Oxford’s first touchdown of the season on an 18-yard run in a 20-19 loss to Lineville. Ray’s 43-yard run accounted for Oxford’s points in an 18-6 loss to Ensley. In a 20-12 loss to unbeaten Jacksonville, Ray had 33-yard and 7-yard touchdown runs. In a 41-13 loss to Piedmont, Ray’s interception at midfield set up his 15-yard touchdown run. He was a second-team all-county pick as a sophomore.

As a junior, in his final season to play for coach Gilbert Adams, Ray scored 16 touchdowns, 13 rushing, two on kickoff returns and one receiving, and was a unanimous pick on the coaches’ all-county first team. He was named the outstanding running back among county schools by the Anniston Quarterback Club. Ray had a 42-yard scoring reception and a 51-yard touchdown run in a 26-13 win over Jacksonville. At Heflin, Ray rushed for 253 yards on 17 carries, including scoring runs of 39 and 96 yards, as Oxford won 32-0. Ray rushed for three touchdowns in Oxford’s 26-6 road win over Wellborn and three more the following week in a 20-6 comeback win over Scottsboro. In Oxford’s 20-0 homecoming win over Colbert County, Ray returned the second half kickoff 90 yards for one touchdown then scored on 31-yard run. In a 31-7 win over Alexandria, Ray returned a kickoff 96 yards for one touchdown and added scoring runs of five yards and 60 yards.

Oxford opened the 1960 season under coach Jack Grizzard with a 19-14 loss to Anniston with Ray scoring on a 1-yard run. He returned the opening kickoff 81 yards for a touchdown as Oxford downed Heflin 36-6. In a 26-13 win over previously unbeaten Piedmont, Ray scored the first two touchdowns on a pair of 27-yard runs. Ray’s 56-yard touchdown run started Oxford’s comeback in a 20-6 win over Wellborn. His 1-yard touchdown run sparked another Oxford rally in a 10-9 win over Sylacauga. Ray scored three touchdowns in 34-7 win over Alexandria on runs of 56 and 12 yards and a 31-yard pass reception. As a senior, Ray repeated as first-team all-county at running back. He also received a football scholarship at Auburn.