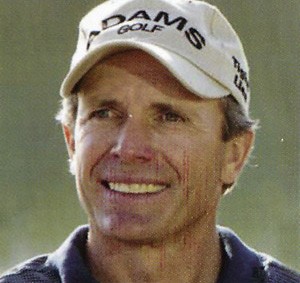 Pate was an infant when he and his family moved to Anniston in 1954. Before moving again in 1967, he discovered golf at the Anniston Country Club. His talent for the game led to a golf scholarship at the University of Alabama. While at Alabama Pate won the St. Andrews Intercollegiate Invitational in 1973, was first team All-SEC in 1974 and first team All-American in 1975 after finishing second in the NCAA championship tournament.

In 1974, at age 20, Pate won the U.S. Amateur Championship and was a member of the victorious Eisenhower Cup team. The following year Pate was low amateur at the U.S. Open, a member of the winning Walker Cup team and, after turning professional, medalist at the PGA Tour qualifying school.

Pate returned to the U.S. Open in 1976 and won. Later that year he won the Canadian Open and was named PGA Tour rookie of the year and co-player of the year. Pate won five more PGA Tour events between 1977 and 1981. In 1982 Pate won the Tournament Players Championship on the then-new Stadium Course at Sawgrass.

When a series of injuries to his left shoulder and three surgeries in three years (1985-1987) curtailed his PGA career, Pate began to design golf courses including the Old Overton Club in Vestavia Hills, Limestone Springs in Oneonta and Kiva Dunes in Gulf Shores. He also worked for ABC and CBS as a golf analyst and commentator.

Late in 2003, Pate joined the Champions Tour. He finished among the top 30 on the Champions Tour money list in 2004 and 2005. In February 2006 Pate won the Outback Steakhouse Pro-Am in Florida, his first tournament win in almost 24 years.