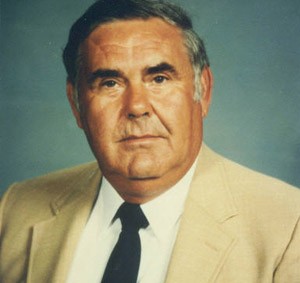 Waldrep played football in high school but basketball was the sport in which he excelled. He was a two-year starter for F.L. (Bulldog) Johnson at Anniston High School. In 1948-49, Waldrep’s senior season, Anniston was 22-4 and Waldrep was named first-team all-tournament at the Sixth District tournament.

Following graduation from Anniston in 1949, Waldrep went to Snead Junior College in Boaz on a basketball scholarship. Military combat service in the Korean conflict interpreted his time at Snead. After his discharge from the Army, Waldrep enrolled at Jacksonville State. In both his junior and senior seasons, Waldrep led Jacksonville State in scoring. In 1953-54, he averaged 22.6 points. In 1954-55, his average was 17.9. As a junior, Waldrep scored 36 points in one half against Livingston State and led his team in free throw shooting or the season, hitting 90.3 percent of his attempts. Both marks remain JSU records more than 50 years later.

After graduating from Jacksonville State, Waldrep became head basketball coach and assistant football coach at Piedmont. During his 12-year tenure as basketball coach, Waldrep’s Piedmont teams were 192-92. In 1960-61, the Bulldogs were runner-up in the Sixth District Class A tournament and won their first two games in the state tournament before finishing fourth. Waldrep’s 1965-66 Piedmont team won the Calhoun County basketball tournament – defeating Oxford, Alexandria and Anniston in succession. Waldrep ended his coaching career after one more season.

He was an administrator at Piedmont for two years then became principal at Wellborn were he served for 25 years. While at Wellborn, Waldrep served on the Alabama High School Athletic Association Central Board of Control for 12 years. He is a member of the Jacksonville State University Athletic Hall of Fame and the Alabama High School Sports Hall of Fame.