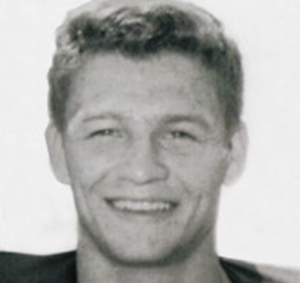 O’Steen was a standout at end as a junior on the 1955 Anniston team that finished 8-1-1 and was selected second team all-county. He served as Anniston’s captain as a senior. Following the 1956 season, he was a unanimous choice on the first team all-county team at end and was named Calhoun County’s lineman of the year by vote of the county coaches.

All-county recognition was just the beginning of the honors O’Steen received following his senior season. In the high school coaches’ all-state voting conducted by the Birmingham Post-Herald, he was named first team end in Class AAA – the largest classification at that time – and Class AAA lineman of the year. He was one of five Alabama high school players named to the 60-man All-Southern team by a 132-member board of coaches and sports writers and published by the Orlando Sentinel.

O’Steen then was named first team on the tenth annual Wigwam Wisemen of America high school All-American team by the Sporting News and played in the national All-American game in Memphis. He received a football scholarship to the University of Alabama.

In August of 1957, just before entering Alabama, he played in the annual AHSAA North-South all-star football game and was named the most outstanding defensive player. A knee injury prevented him from playing in Alabama’s freshman games that season. In 1958, he played for the varsity in Paul Bryant’s first three games at Alabama. In the third game, he suffered a knee injury that ended his football career.

Now retired after a lengthy career in law enforcement, largely as a special agent with the Bureau of Alcohol, Tobacco and Firearms, O’Steen is active with the Alabama Scenic River Trail, the Alabama Women’s Soccer Foundation and the First-and-10 Club in Tuscaloosa which assists former University of Alabama athletes in finding employment.