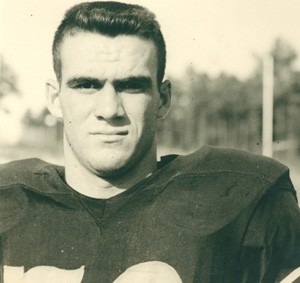 Warren was a three-sport athlete at Alexandria High School from the fall of 1957 until his graduation in the spring of 1960.

In football, he started at linebacker as a sophomore and starred in Alexandria’s 14-13 win over Jacksonville in the Turkey Bowl. As a junior, Warren was voted first team all-county as an end by Calhoun County’s coaches. The Birmingham News selected him first team Class AA all-state, the only junior to make the 11-player first team. The Anniston Quarterback Club named him the outstanding lineman among county schools and he was honorable mention on the Orlando Sentinel’s All-Southern team.

During the 1959 football season, Warren served Alexandria as a co-captain while playing halfback on offense and middle guard on defense. He was a unanimous choice for the 1959 all-county team as a guard. Warren was named first team Class AA all-state by both the Birmingham Post-Herald as a tackle and the Birmingham News at guard. For the second year, the Anniston Quarterback Club chose Warren as the outstanding lineman among players from Calhoun County schools. The Wigwam Wisemen named Warren a high school All-America and he received a football scholarship to Auburn University. He was invited to play in both the Alabama High School Athletic Association’s North-South all-star football game and the East-West All-America game in Memphis but his coaches at Auburn persuaded him not to play in either game.

In both 1959 and 1960, Warren was picked for the all-tournament team at the Calhoun County basketball tournament. As a senior, Warren scored 23 points as No. 4 Alexandria upset Oxford 46-39 in the Calhoun County tournament championship game. He had nine points in the fourth quarter despite playing with four fouls. At the 1960 Sixth District basketball tournament, Warren was named to the all-tournament team as Alexandria finished second and advanced to the AHSAA state tournament for large schools.

As a sophomore during the 1958 track season, Warren set an Alabama Relays record of 15.3 seconds in the 120-yard high hurdles. Later that year, in the Sixth District track meet, he ran 15.2 seconds in the high hurdles and established a state record in the 180-yard low hurdles with a time of 21 seconds flat. At the Class A state track meet, Warren won both the 120-yard and 180-yard hurdles. As a junior, he was second at the state meet at 120 yards and third at 180 yards.