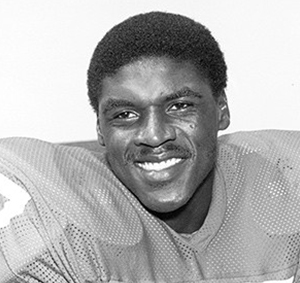 Robinson was a standout in both football and basketball at Alexandria High School, graduating in 1976. His high school accomplishments earned a football scholarship to Jacksonville State University. At JSU, he was a four-year letterman. Robinson lettered at defensive end in his first two seasons at Jacksonville State. As a sophomore, he started every game at end as the Gamecocks captured the Gulf South Conference championship and finished second in the NCAA Division II playoffs. Lack of depth at linebacker led his coaches to move Robinson to that position for his junior and senior years. The Gamecocks were also Gulf South champions in his junior year.

More than twenty years after his final game, Robinson was selected as a member of JSU’s 2003 All-Centennial team.

At Alexandria, he played baseball, basketball and football. As a sophomore in the 1973-74 school year, Robinson was a second team member of the all-state basketball team. In his senior season of football, 1975, Robinson was first team all-county at quarterback. In his senior basketball season, he played both guard and forward and was one of twelve players chosen for the all-tournament team for the annual Calhoun County tournament. After basketball season concluded, Robinson was one of five players named first team all-county. He averaged 21 points and 10 rebounds per game as a senior.