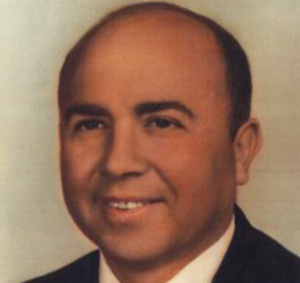 A native of Wadley and graduate of Wadley High School, Adams spent two years at Southern Union junior college before entering World War II military service in 1942. Following his discharge in 1945, Adams completed his undergraduate education at Jacksonville State Teachers College, graduating in December 1947. When Oxford coach Bill Finch resigned at the end of the fall semester, Adams was hired as his replacement and immediately took over the basketball program. When school resumed in January 1948, Oxford downed Alexandria 36-32 on the road in Adams’ first game as coach. Unseeded in the big school Sixth District tournament that year, Oxford reached the quarterfinals before losing to No. 4 Gadsden.

The 1951-52 Oxford team won three consecutive games, the third a 58-54 victory over Alexandria, to claim the championship of the inaugural Calhoun County basketball tournament. The Yellow Jackets were Calhoun County tournament champions again in 1955 and 1956. In 1960, Adams final year as coach, Oxford was runner-up to Alexandria in the county tournament. That same year, Oxford was the No. 3 seed in the Sixth District tournament and lost to No. 2 Alexandria in the semifinal round before winning the consolation game and finishing 23-5.

It took Adams a little longer to achieve in football the degree of success his basketball teams enjoyed immediately. His most successful football teams came in 1955 and 1956. In 1955, Oxford was 7-1-1 in the regular season, losing to Jacksonville 13-12 in Oxford’s second game and tying mighty Anniston 7-7 four games later. In the Turkey Bowl charity game that year, the Yellow Jackets avenged their lone defeat with a 33-7 win over Jacksonville.

The 1956 football team went 8-1-0 in the regular season, losing only to Anniston. The Yellow Jackets ended their regular-season schedule with a 21-6 win over Alexandria to earn the school’s first Calhoun County football championship. Six days later, Oxford defeated Alexandria 13-0 for its second consecutive Turkey Bowl crown.

In 1959, Adams led Oxford to a 6-3-0 record after a winless season in 1958. He was named Calhoun County football coach of the year by his peers in his final season as head football coach.

At the close of the 1959-60 school year, Adams left Oxford and never coached again. He became diversified occupations teacher at Anniston High, a position he still held when he died unexpectedly in June 1966 at age 45.