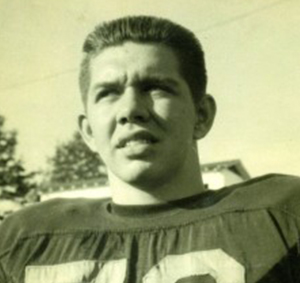 Luttrell was an outstanding high school athlete at Jacksonville High School where he lettered in football and basketball. As a junior, he was a starter on the basketball team that won the Sixth District tournament then won two games in the state tournament before falling in the semifinals to eventual state champion Woodlawn.

It was in football that Luttrell excelled. He was a powerful running back and sure-tackling linebacker. A four-year starter, he rushed for more than 1,000 yards in each of his four high school seasons from 1954 through 1957.

As a freshman in 1954, Luttrell scored on a 50-yard run with two minutes to play, snapping a 13-all tie, to give the Golden Eagles a 19-13 win over Alexandria. Luttrell finished with 12 touchdowns in his freshman season and was chosen second team All-County.

As a sophomore, Luttrell tallied 14 touchdowns to lead Calhoun County in scoring. He had five touchdowns in a 33-0 win over Cherokee County. In a 19-0 homecoming win over B.B. Comer, Luttrell dashed 93 yards for a score in the first half then returned the second half kickoff 82 yards for a second touchdown.

In his junior year, Luttrell had multiple-touchdown games against Ohatchee, Cherokee County, Alexandria and Cleburne County and was recognized as an honorable mention All-State performer by the Birmingham Post-Herald.

Against B.B. Comer in the eighth game of his senior year, Luttrell ran for 152 yards and surpassed 1,000 yards rushing in a season for the fourth time.

As a sophomore, junior and senior, Luttrell was first team All-County. In his four-year high school career, Luttrell scored an amazing 322 points, a Calhoun County record at the time of his graduation and for many years thereafter.

After his senior season in 1957, Luttrell was a consensus All-State selection, recognized by both the Birmingham News and the Birmingham Post-Herald. The Post-Herald named Luttrell its state back of the year among players from schools in Jacksonville’s class.

As a senior, Luttrell also earned Wigwam Wisemen All-America honorable mention recognition from the Sporting News. He received a football scholarship to Auburn and played in the AHSAA North-South All-Star game in August of 1958 before starting practice at Auburn. He was a starter on Auburn’s freshman team before a knee injury ended his season. After spending time in the navy, Luttrell completed his college football career at Jacksonville State.