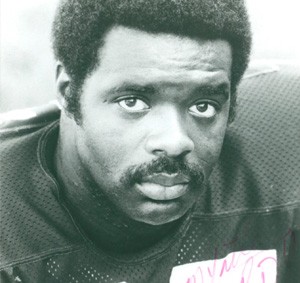 Rudolph, a native of Anniston, graduated from Cobb Avenue High School in 1968. At Cobb Avenue, he played football from 1964 through the 1967 season on some of coach Robert Mosby’s finest teams. In Rudolph’s final three seasons at Cobb, the Panthers were 24-4-2. As a junior, Rudolph started at defensive end for a team that won its final six games, shutting out three opponents and allowing only one touchdown to each of the other three.

In 1967, with Rudolph again anchoring the defensive line at one end, Cobb completed the regular season 9-0-0 and allowed only 46 points. In the Alabama Interscholastic Athletic Association large school championship game that year, Cobb Avenue and Abrams of Bessemer played to an 18-18 tie and were declared state co-champions. Rudolph’s play in his senior season earned him all-conference honors as a defensive end and a football scholarship to Kentucky State College.

At Kentucky State, Rudolph helped revive the Thorobreds’ football fortunes. In 1971, his senior season, Kentucky State ended 8-3-0 and played in the Orange Blossom Classic, the school’s first post-season game in 20 years. Rudolph was a football team captain at Kentucky State. He was a Pittsburgh Courier honorable mention All-America after his senior year.

From Kentucky State, Rudolph played six seasons in the National Football League as a defensive end.

He was the seventh round pick of the St. Louis Cardinals in 1972 NFL draft. He played in 14 games for the Houston Oilers during the 1972 season. In 1973, Rudolph returned to St. Louis where he was a three-year starter for Don Coryell‘s Cardinals. St. Louis was 10-4-0 and 11-3-0 in Rudolph’s final two seasons with the team and NFC East champions both years.

From St. Louis, Rudolph moved to the Tampa Bay Buccaneers in the veteran allocation draft prior to the 1976 NFL season. As a starter for Tampa Bay in 1976, he recorded 56 total tackles, 44 solo stops and 12 assists. His five quarterback sacks tied for his team’s lead.

In 1977, Rudolph started all 14 games for Tampa Bay. He recorded 6.5 sacks, second best for the Buccaneers.

Rudolph was traded to the Miami Dolphins in 1978 for an eighth round pick in 1979 draft but suffered a pre-season injury and never played another NFL game.

Rudolph holds a Bachelor of Science degree in health and physical education from Kentucky State and is a member of the Kentucky State University Athletic Hall of Fame.