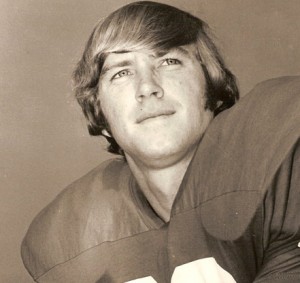 In high school Callahan starred as a running back for Saks. As a junior in 1968, he scored a then-modern era Calhoun County record 22 touchdowns as the Wildcats finished the regular season 9- 0-0 and were one of four teams to advance to the Class 3A playoffs. Callahan led Saks to its first football victory over Alexandria as he rushed for 172 yards and all three Wildcat touchdowns in a 19-13 win. Against Oxford, Callahan ran for 181 yards and two touchdowns in the 27-18 win that propelled Saks into the state playoffs for the first time. In the semifinal game against Fairfield he carried 40 times for 177 yards and one score as the Wildcats won 31-0.

During his senior season Callahan‘ s two touchdowns in Saks’ 28-0 win over Oxford gave him 17 touchdowns and 102 points for the season, making him the first Calhoun County player to surpass the 100-point plateau twice. As a junior and a senior he was a unanimous All-County selection.

As a freshman at Jacksonville State in 1970 Callahan rushed for 201 yards against Tennessee- Martin, the first time a Gamecock player had gained 200 yards in a game. Five weeks later he ran for a career-best 275 yards in JSU’s 55-28 homecoming win over in-state rival Florence State. Callahan closed his freshman year by gaining 224 yards against Florida A&M in the Orange Blossom Classic win that completed the Gamecocks’ 10-0-0 season. No other Jacksonville State player has rushed for more than 200 yards in a game more than once. Callahan ended the 1970 season with a team high 1,293 rushing yards.

In 1971 (905 yards), 1972 (1,087 yards) and 1973 (952 yards) Callahan led the Gulf South Conference in rushing and was All-Gulf South Conference each year. As a senior he served Jacksonville State as one of three permanent captains. Following the 1973 season he was a Little All- American selection by both the Associated Press and the NAIA. Callahan is one of only two Gamecocks to have his uniform number (33) retired.

Callahan averaged over 100 yards rushing per game for four years at Jacksonville State. When he left JSU his 240 career points scored was a school record. Callahan still holds the Gamecocks’ career rushing record with 4,237 yards.

He also holds the Jacksonville State single game records for yards per carry with an average of 13.2 yards against Northeast Louisiana in 1973 and most carries with 39 against Livingston State in 1972.