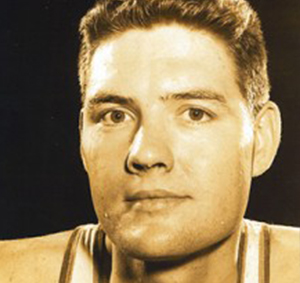 Bob Miller was a three-year letterman in football and basketball at Piedmont but basketball was Miller’s sport and he excelled wherever he played. As a senior at Piedmont in the 1947-48 season, he was one of five players chosen first-team all-tournament at the Sixth District tournament. The team was dominated by players from district champion Etowah, Gadsden and Talladega. Miller was the lone selection from a small-school team.

In high school, Miller was at his best against bigger schools. He scored 20 of his team’s 30 points in a 31-30 loss to Oxford. He led Piedmont with another 20-point performance in a 41-34 victory over Anniston. Miller scored 24 points in Piedmont’s 47-30 win against Alexandria. In a 33-23 loss to Etowah, Miller had 16 points. He finished the season with 354 points.

After completing high school, Miller spent two seasons with coach J.W. Stephenson’s Jacksonville State teams. In Miller’s sophomore year, Jacksonville State was 23-6 and Miller led in scoring with 428 points. That total was almost 25 percent of the Gamecocks’ total as a team. He connected on 76 percent of his free throws and shot 41 percent from the field.

Miller missed Auburn’s initial games of the 1952-53 season but led the team in scoring with 228 points after gaining eligibility and was named the Tigers’ most outstanding player of the 1953 season.

As a senior, he served as Auburn’s captain and averaged a double-double of 17.8 points and 11.5 rebounds per game over a 24-game season. His work earned him Associated Press third-team all-Southeastern Conference recognition.