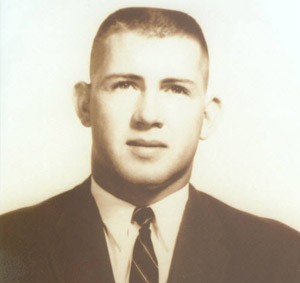 Bible was a four-sport letterman during his high school sports career at Piedmont. He lettered in baseball twice before turning to track during the spring. He was a three-year letterman in track and in 1958, as a junior, he was fifth overall in the first Alabama High School Athletic Association decathlon. In basketball he was both All-County and All-District.

Bible achieved his greatest sports success in football, a sport he played for three years at Piedmont. He was a lineman most of his high school career. In his senior season, Bible moved to the backfield in Piedmont’s single wing offense. He was a first team All-County pick and added All-State recognition to his list of honors. As a senior, he was a co-captain in football. Piedmont finished 9-1-0 that year, avenging its only loss during the regular season with a 26-6 win over Wellborn in the Turkey Bowl.

His success at Piedmont attracted the attention of a host of college football coaches but Bible chose to accept a scholarship offer from Paul (Bear) Bryant and the University of Alabama. As a freshman, he returned to the line as a guard. Injuries limited his playing opportunities during his sophomore season. As a junior in 1961, he lettered on Alabama’s national championship team at tackle, playing behind All-American Billy Neighbors. During spring practice Bible earned first-team status at right tackle. He was considered particularly valuable because of his ability to play both tackle and guard.

All of his accomplishments came despite a hearing loss in one ear. Bible never experienced the promise of what was expected to be his finest season at Alabama. On a fishing and swimming trip to a creek near Mobile, where his parents had moved, Bible drowned on June 12, 1962. He was 21 years old. “All of his days he did nothing except reflect credit on his mother and his father and all of them who loved him. It is an obligation. He paid it high honor,” wrote Benny Marshall, then sports editor of the Birmingham News.